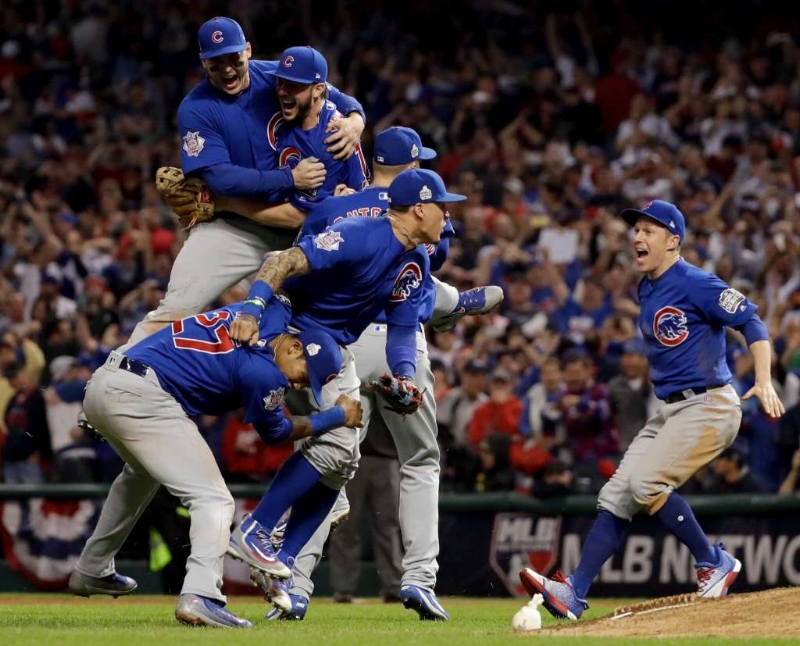 After 108 long years, the whole world was paying attention as the Cubs won a nail-biting World Series championship in the 10th inning of Game 7 on November 2, 2016. Die-hard devotees of all teams said that Wednesday’s game was the most exciting baseball game they had ever watched. Even St. Louis Cardinals fans, arguably the Cubs’ biggest rivals, were (at times) willing to concede a little happiness for the Cubs. With the centrifugal force firmly planted in Chicago, the Cubs’ win ignited a firestorm of celebration nationwide, with “Go Cubs Go” on endless loop in Facebook feeds and on the news.

It was as if everybody was willing to cast aside their own loyalties for a moment to recognize a historic underdog and hardworking team when they saw one. Here are just a few examples of the post-win celebrations:

As a friend and super-fan wrote on his page, “Best 48 hours on Facebook ever.” Being a Chicago native, my feed was flooded with inspiring, sentimental videos, articles, and photos. The spirit of joy and support was alive. There may have been criticism, but it was drowned out by Cubs love. You can be sure that this hyper-celebration fueled the motivation of teams everywhere to work hard through yet another game and long season for the promise of such celebration in their honor.

It was clear that strong leadership at many levels of the team’s organization paved the way for the Cubs’ win. Cubs’ management undoubtedly has studied the principles of good leadership, as many business managers do in order to be more effective at their jobs. Did you ever consider that parents and educators can do the same?

Based on best practices from over 1,000 business and not-for-profit managers, Kouzes and Posner developed a well-known model of transformational leadership with five underlying principles that guide effective leaders. Here’s the five-point paraphrase:

This model of leadership is straightforward: live your values authentically; use visionary thinking to motivate others to find purpose; be willing to step outside the status quo; listen to other people’s thoughts and motivations while allowing them to make individual choices; and appreciate people for what they do. It is point number five in the Kouzes and Posner model that begs our immediate attention: celebrate success.

As adults, we have become incredibly serious. We are tense, anxious, and high-strung. We are fearful about our children’s future, put ourselves and our children under enormous pressure to perform, and treat our kids like mini adults. Even when children have pronounced strengths, we tend to zoom in on what they don’t do well and go all-in to fix their perceived weaknesses.

We have become critics, not only of ourselves and our fellow men and women, but of our children as well. As author Todd Henry and Michael Port discussed on an Accidental Creative podcast, critics don’t change the world. “I’ve never read a great biography of a critic. I’ve never even seen one in the biography section,” mused Henry.

How can we get out of playing the role of top critic for ourselves and our children?

We need to bring back our joy! We need to celebrate! As is clearly illustrated in the leadership model above, celebration propels us to start over again and work hard again just as the Cubs will do almost immediately as they get back to training. Celebration is the fuel that encourages us to go on.

We talk a lot about developing grit in our kids. Personally, I prefer the more empowering word: perseverance. But either way, the promise of celebration can fuel us, the celebration itself can refill our tanks, and both help the cycle of growth continue, even through tough times.

How Will You Celebrate?

As good transformational leaders, we must model our ideas.

So, first things first: How can we bring the spirit of celebration into our own adult lives first? In what ways might we cast aside our own loyalties or insecurities to celebrate the successes of others?

We can look to the Cubs’ celebrations above as examples. The Bulls and Blackhawks didn’t have to celebrate at their own games. For the Bulls especially, the big Cubs’ win might have drawn attention to the fact that they haven’t won a championship yet this century. But they didn’t let insecurity stop them, and went ahead and celebrated anyway. The actors and actresses in Hamilton, the musicians in the CSO didn’t have to take time out of their days to sing and play the Cubs song.

But they did. They crossed traditional or stereotypical boundaries to celebrate another’s win. Practically all of Chicago’s skyline was lit up in red and blue but New York City’s Empire State, with two baseball teams of its own, certainly didn’t have to give a nod to the Cubs. But it was fun to do, it was joyful to do, and it made people feel good to be part of the celebration.

Next step: How might we celebrate our children’s big or small wins, for the sake of joy, perseverance, and making hard or good work feel worth it?

I’m not talking here about rewards, like giving kids candy for bringing home A’s. I’m talking about being a parent-leader and authentically celebrating according to your own values. It doesn’t have to be school-related, but it can be. Perhaps your child just took a personal risk, like standing up against a bully at soccer practice, or conquered a lifelong fear of heights with a recent rock wall climb. Maybe an older sibling helped a younger sibling in a special show of affection. Perhaps your child helped you rake leaves for a few hours last weekend. Your celebration can be a simple verbal acknowledgement, or cooking a favorite meal, or bringing home a treat. It doesn’t have to be Cubs style over-the-top, but just fun and authentic. It could even be the simple act of celebrating your child for who he or she is at the core.

To Indians Fans, or People Who Are Tired of Cubs Celebrations by Now

This article might feel unfair to Cleveland Indians fans. After all, they didn’t win the game. Is it highlighting their loss to celebrate the Cubs’ victory? Not in my mind, and that is the crux of sportsmanship.

When we embody the spirit of celebration, this attitude pulses outward and creates a ripple effect that all but ensures that when it’s the other guy’s turn to win, he will be celebrated as well. If you hold back because you think celebrating someone’s good work might make another feel badly, that’s not the spirit of transformational leadership.

At the same time, if there are Indian fans out there who are not celebrating the Cubs victory, that is their prerogative. If they don’t feel genuinely happy about acknowledging it, they shouldn’t do so. They can keep celebrating the amazing feeling of the Cavs’ NBA victory and have even more fun! Celebration has to be authentic, so don’t apply this principle of celebration when you really don’t feel it.

I challenge adults who are reading this article to deliberately work to bring the spirit of celebration to your own lives. Then, figure out ways to celebrate your kids authentically according to your values. Ponder the questions above, and think about that celebratory piece of the leadership puzzle that can help you be a transformational parent-leader.