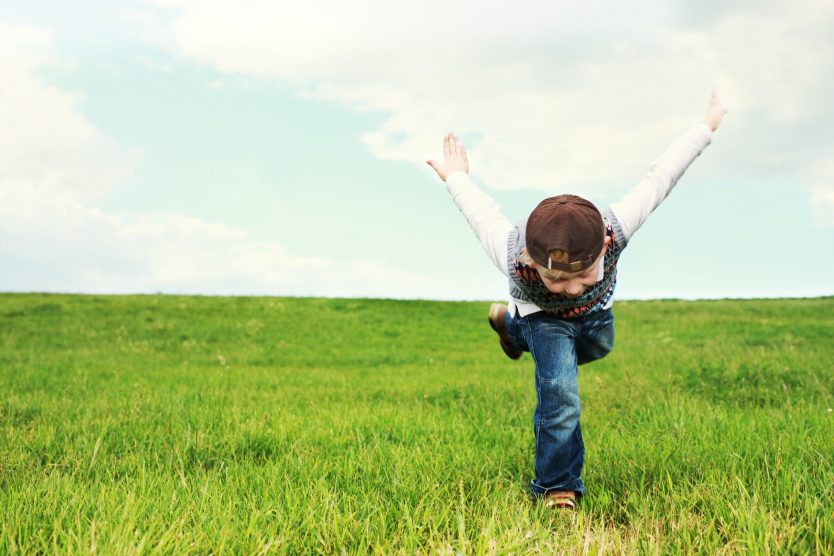 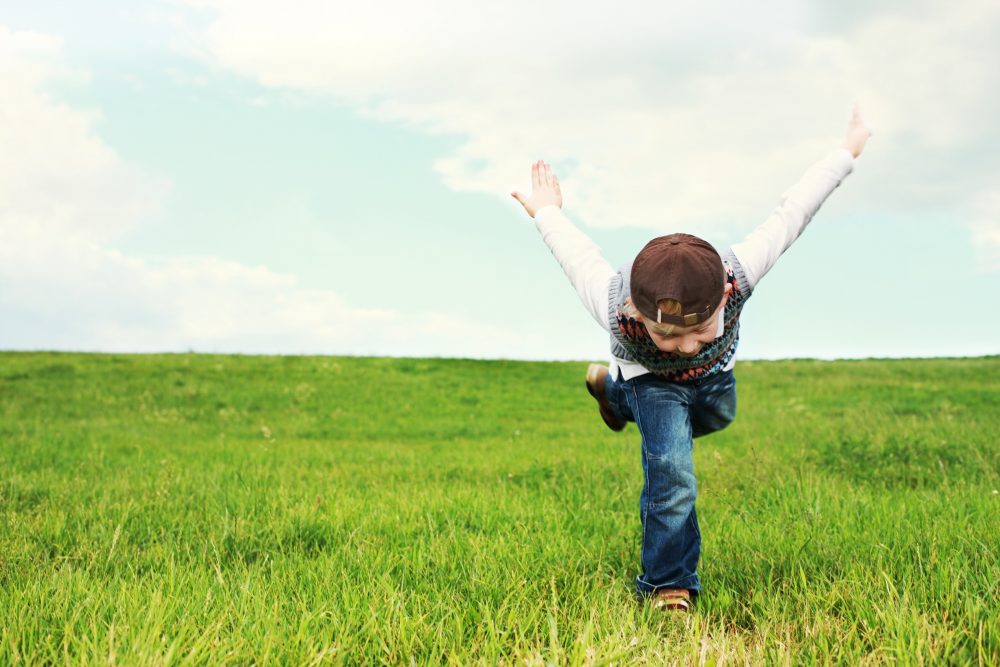 Guest post by Dr. Iman Rasti, middle school English and humanities teacher at Rippowam Cisqua School in Bedford, New York. Dr. Rasti is one of the teachers in the school’s first Innovation Cohort, led by Sparkitivity’s Kathryn Haydon in partnership with RCS Innovation Director Miles Cameron, to create a grass roots move toward deeper learning throughout the school. Teachers were trained in the Torrance Incubation Model to help them easily integrate high-level creative thinking into their content areas and deepen student engagement. Read the case study on how we set up this program here.

One freezing January afternoon, standing around the campfire and drowned in the crackling fire sounds, my seventh-grade students took turns to answer this question: “What are you grateful for?” This brief mindfulness activity closed a half-day history project carried out on the wet, cold fields on our middle school campus.

In our seventh-grade American history class we study the American Revolution: causes and effects, major battles, historical facts and statistics. Aiming to answer the central questions regarding the American Revolutionary War, we usually read and analyze primary source documents, discuss the key concepts, debate controversial issues, write research papers, and frequently work in groups to further explore the topic at hand. Although these activities, along with the use of media and some hands-on mini-projects, make the lessons really engaging, there are still some deeper questions to be answered: How can you bring the topic of the Revolutionary War to life for your students? How can you help them draw meaningful connections between that war and contemporary ones? How can you help them realize that wars should not just be looked at through numbers, and that knowing about and empathizing with the individuals fighting in them and what they go through everyday is arguably even more important? 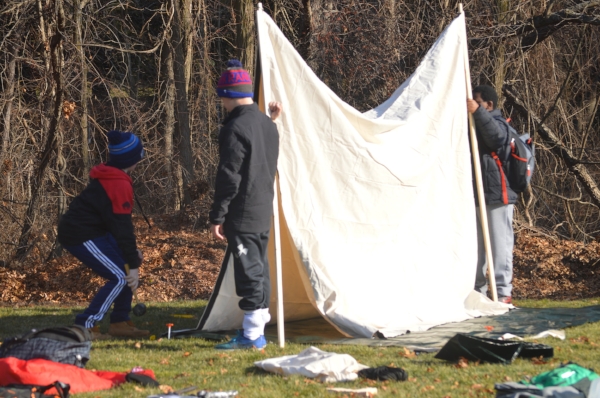 Pondering these and many similar questions on one hand, and attempting to facilitate and foster creative thinking skills (See Appendix) in my students through mindfulness and experiential learning on the other hand, I designed a project in Torrance Incubation Model (TIM ) format the last time I taught the American Revolutionary War. A highly effective approach to teaching any lesson to children of varying age groups, TIM has three interactive, yet sequential stages: heightening anticipation, deepening understanding, and extending learning. Torrance and Sisk (1997) summarized the goals of the Incubation Model of Teaching as follows:

“Before creative thinking can occur, something has to be done to heighten anticipation and expectation and to prepare learners to see clear connections between what they are expected to learn and their future life (the next minute or hour, the next day, the next year, or 25 years from now). After this arousal, it is necessary to help students dig into the problem, acquire more information, encounter the unexpected, and continue deepening expectations. Finally, there must be practice in doing something with the new information, immediately or later” (Torrance and Sisk, 1997, p. 91, cited in Hébert et al. 2002, p. 25).

The project was to reconstruct a typical non-combat, camp day of a Continental Army soldier during the American Revolutionary War, with emphasis placed on setting up a tent, making fire, cooking food, playing games, and reading letters received from the loved ones. To arouse my students’ curiosity, get their attention, and create the desire to know (Heightening Anticipation), I decided to reveal what the project was going to be in a piecemeal fashion.

The class was already studying a whole unit on this topic and they were told that there was going to be an experiential project at the end, but I intentionally created a context where they had to keep guessing and imagining what kind of project it would be. For example, when I received the package I had ordered with the tripod campfire stand as well as ironcast crock pots and other utensils for the cooking phase of the project, I simply unpacked the box and laid everything on my desk for a few days without telling anyone what they were going to be used for. I did the same when I received the canvas tarp, cords, and poles for pitching the tent.

After about a week, I finally introduced the project and had my students break into small groups to do some preliminary research about the main components of the lesson. Once they acquired some basic information, we set out to complete the project outside on our athletic fields which were partly covered by snow. This was the phase where students had to dig into the problem and encounter the unexpected (Deepening Understanding). For instance, the howling wind had made it difficult to pitch the tent and the wet wood had made it hard to start a fire. Highly motivated to solve these problems, students intuitively started seeking original solutions by experimenting with new ideas, testing solutions, elaborating, and communicating their discoveries with each other (Haydon et al. 2016). 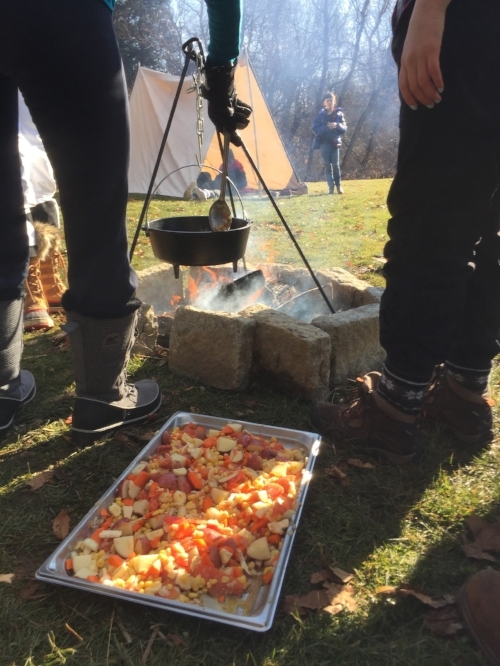 Once the scrumptious food was cooked over the fire and served inside the tent, the students played authentic American Revolutionary War games, discussed war-related topics, and some even lay down, simply savouring their experience by being present in the moment. Next, the students, pretending to be soldiers, gathered around the campfire and recited the real letters written by some American soldiers’ families during the Revolutionary War. It was an emotional time for the students as they were deep into characters, empathizing with those individuals and what they had to go through psychologically; not just because they were fighting in a deadly war, but because of being away from their loved ones, with the unsettling feeling of the uncertainty of ever seeing them again. “I’m grateful for peace,” one student uttered emotionally. “I’m grateful for the American soldiers, past and present, who risk their lives for our safety and security,” said another one proudly. Engaged in this creative mindfulness activity, the students tried to keep the learning process active (Extending Learning), each sharing what they were grateful for.

Summarizing the main tenants of a creative learning paradigm, Kathryn Haydon (2015) argues when creativity is integrated with academic content teaching and learning, learning becomes more meaningful to students, which in turn leads to enhanced intrinsic motivation, resulting in new ideas, skills, or personal growth. My students had become so involved and committed that they lost a sense of time that day. They asked if they could stay right by the fire a few minutes longer, reflecting on their experience, doing nothing but being immersed in the warmth of the fire, each other, and the subject they were studying, vicariously experiencing a typical day in the life of an American soldier during the Revolutionary War, or any other war for that matter. And I simply let them. 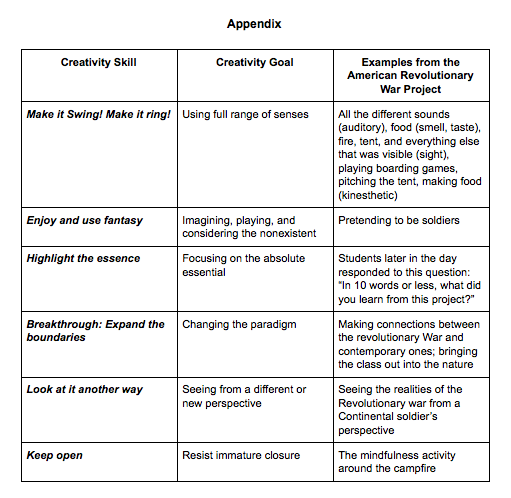 Hébert et al. (2002). E. Paul Torrance: His Life, Accomplishments, and Legacy. The National Research Center on the Gifted and Talented.