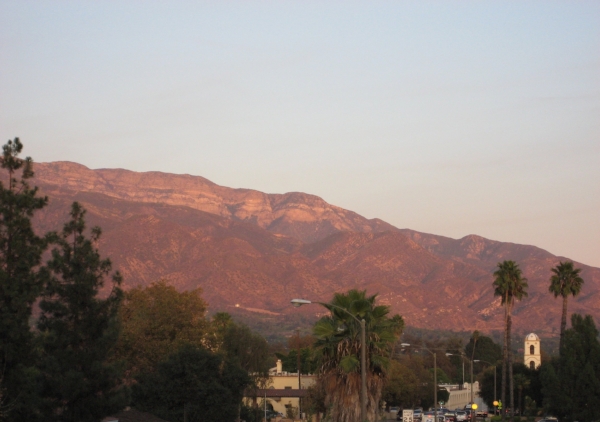 Creativity Rises From the Ashes: A Love Letter to Ojai After the Thomas Fire

If you watch the national news, you may despair that the world is going to hell in a hand basket. If you watched the national news these past two weeks, you may think that all of California is charred or burning. You may think that everyone there is depressed, afraid, or preying on victims. I had some of these feelings, too, before spending a week trying to keep tabs on family, friends, and former neighbors in my adoptive hometown of Ojai, California.

To be sure, the fires are horrendous. They have left a wide trail of ashen destruction. They have destroyed homes, ranches, and buildings. Families are left with nothing but the clothes on their backs. Fires continue to burn, people are still displaced, and there is much to be done.

But I’d like to share a story of the triumph of human creativity and community love that rose up in the midst of the inferno and, I daresay, saved a town.

By definition, creativity is novel, active thinking. Creativity stares down fear so that it blinks first. It opens doors that lead to pathways on which we can move forward. If fear is conformity to sensational claims that render us hopeless, creativity is the opposite.

When we offer a new idea borne of our creative thinking, receptivity from others and collaboration with them can magnify it exponentially. Creativity and collaboration rose from the embers (before they had time to turn to ash) last week in Ojai even as it was ringed by hellacious fires and its fate was unknown, revealing the heart of humanity at its best.

Last Monday, a fire began in the hills east of town and was turbo-fueled by dry vegetation. A second fire began in another location and soon fused with the first. In an eery allusion to the tune by Johnny Cash, who actually had a ranch in the Ojai Valley, the town was soon encircled by a ring of fire. It was frightening. Many people live on sprawling, chaparral-filled properties in the hills and canyons and were in harm’s way. So many lost their homes. But the bulk of the population lives in the town proper. There are only four ways in and out of the valley, and several were closed. Many had evacuated but many were also at the shelters in town. Wednesday night the fierce Santa Ana winds were expected. Even with hundreds or thousands of vigilant firefighters on command, would the town survive?

Trying to get up-to-date news on friends, I realized that national news sources were inaccurate and mostly fear-mongering. Facebook updates from friends who were actually there were much more accurate. These led me to the Ojai hub of creativity and collaboration in the midst of disaster: a Facebook page dedicated to sharing information about the fire. The simple idea to set up a page to facilitate direct communication was a creative act. Instead of giving up or becoming frustrated, the person took action. For the next week, I was glued to this page, scanning for ways I could help and witnessing the very best of humanity (and best use of social media I’ve seen).

Thursday morning I woke up on the East coast and went straight to the page. Ojai had survived the night! Newspapers were reporting a “miraculous shift in wind” that saved the most populous part of town, with the tireless work of superhuman firefighters. I posted this article to the page with a message of hope. Not long after came the following post from an Ojai resident: “However this goes, our community needs to throw our firefighters a HUGE thank you party. Who’s with me to make this happen?” The post quickly garnered over 600 “likes” and almost 150 comments. The Ojai community was in. That’s evidence of creativity number two. In the midst of a ravaging fire, fate unknown, Ojai was planning a party to thank the firefighters.

Just recently, I wrote about the importance of gratitude—to health, wellness, and creativity. If it’s possible to measure the probability of Ojai completely rebuilding by considering the expression of gratitude alone, Ojai will be back more than 100 percent. The gratitude to the first responders and to others in the community is overflowing. Through the Facebook page, I saw dozens of people donating food, chapstick, respirator masks to filter out the smoke, water for first responders. I saw them saving animals. I saw them making signs to thank the firefighters, offering free food, and setting up a “coffee brigade.” I saw friends checking up on friends. “Who lost their house? How can we help?”

Local vigilantes patrolled neighborhoods all night to protect from looters. One guy drove around for days answering questions for evacuees about surviving structures and smoldering fires. There was the sharing of Go-Fund-Me pages for those who lost everything. One woman said she was taking her kids out of town till the smoke clears, would anyone who was displaced like to live in her home till she gets back? There were prayers, offers of free massages for responders, free therapy for victims, free handyman services for those who need to repair and rebuild. Hairdressers were offering haircuts. Businesses were donating filtered drinking water and refilling bottles for free.

There was a new hashtag #ojaistrong that turned into a logo for t-shirts and hats being printed and sold to raise money for people who lost everything. Restaurants, whose businesses no doubt are suffering with so few people in town, are serving free food to responders and victims. A man and his kids delivered 240 tamales to the fire stations to thank them. A phrase was coined, “Ojai is not a place, it’s a People.” Someone even proposed an air filtration mask decorating contest. Way to bring in humor and levity!

Ojai was overflowing with gratitude and creativity, even as thousands of firefighters continued the fight to save it. Talk about leading with grace and refusing to be overcome by fear. This is creativity in action, and I hope that the Ojai community can continue to maintain these even in the face of difficult rebuilding and lingering smoke. It proves that humans have their own individual constellations of creative strengths and they can use them in good times and bad.

Are you witnessing the Ojai effect in your community? If not, you can be the spark to ignite the fire of kindness. These are the type of fires that need to spread, and we don’t need disasters to start them. 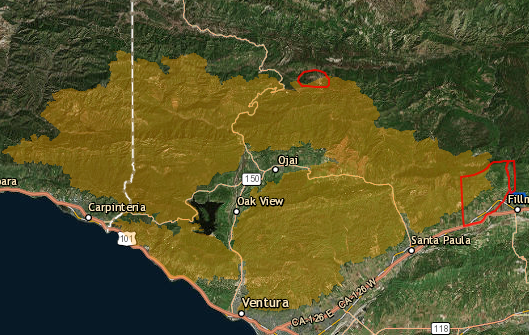 This is the map of the fire as of 12/17/17. The yellow is where the fire burned or is burning. Ojai is that little green crescent in the middle. Source: http://www.readyventuracounty.org